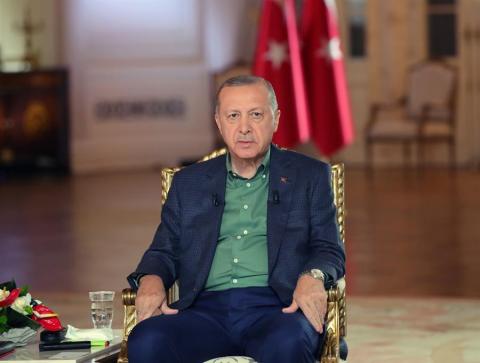 Forest fires are a global threat just like the COVID-19 pandemic, Turkey's president said on Aug. 4.

The whole world is currently facing this challenge, which is like a "terrorist threat," Recep Tayyip Erdoğan said in a live television interview.

He said 187 forest fires have erupted in Turkey in the past eight days, with 15 of them yet to be put out.

Some 51 helicopters and 20 planes are engaged in operations to douse the wildfires, the president said.

He added that Turkish intelligence and police personnel are thoroughly investigating the fires.

Erdoğan said Azerbaijani President Ilham Aliyev told him that his country will send another amphibious aircraft, which is currently undergoing maintenance, to Turkey to support its ongoing battle against the forest fires in its southern provinces.

A total of 160 personnel, 40 fire trucks and a plane will arrive from Azerbaijan early Thursday, he said.

This will be the third team Baku has sent to assist Turkey's fight against the wildfires.

According to official figures, at least eight people have lost their lives since the fires started in south and southwestern Turkey last Wednesday.

Turning to the global coronavirus pandemic, Erdoğan said Turkey aims to get emergency use authorization for its indigenous Turkovac COVID-19 vaccine as soon as possible for its widespread use in the country.

"Phase 1 and Phase 2 of our domestic vaccine Turkovac have been successfully completed," he said, adding the clinical and research phase started in June.