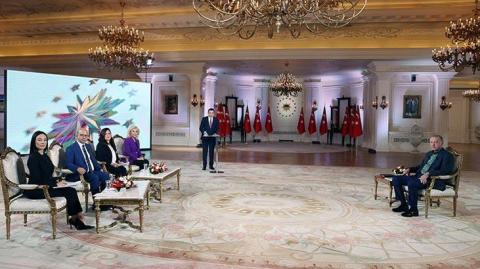 Turkey's headline inflation rate, which reached 18.95 percent in July, will decrease gradually in the rest of the year, President Recep Tayyip Erdoğan has said.

"We will see a contraction in the inflation rate during August," Erdoğan said on a live broadcast of a private channel late on Aug. 4.

He also said that the Turkish economy would post a GDP growth of 7 percent this year.

The Turkish economy expanded 1.8 percent last year despite the pandemic and posted a robust growth of 7 percent in the first quarter of 2021.

"When we look at the economic leading indicators, we see that growth trend is continuing and I can clearly say that we will reach a growth rate over 7 percent," Erdoğan stated.

"The support we provided to protect our manufacturing industry during the pandemic are now producing results," he said.

In July, the highest annual rise was seen in food and non-alcoholic beverages at 24.92 percent, transportation at 24.62 percent and furnishings and household equipment at 22.7 percent last month.

After the TÜİK released the inflation data, the Turkish Lira gained some ground against the U.S. dollar on the expectations that the Central Bank will not lower rates in the face of the high inflation rate.

However, if the lira's recent modest recovery persists, annual inflation could fall with the base effect, and hence, the possibility of moderate rate cuts will stay on the table, according to analysts.

In July, the Central Bank kept its...