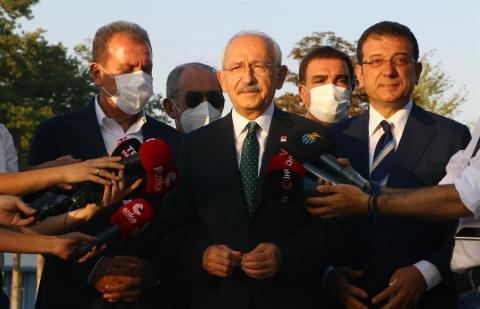 The main opposition Republican People's Party (CHP) has called for the recreation of the Turkish Air Association (THK), a key aerial body tasked to fight forest fires, in a nationwide campaign with the participation of municipalities, the government and civil society.

"I want to call on the government authorities. Our mayors from 11 metropolitan municipalities have announced that they will contribute to [the revival] of the THK, but an additional allowance from the general budget is also necessary," CHP leader Kemal Kılıçdaroğlu told reporters after a visit to the THK on Aug. 4.

Turkey is fighting multiple forest fires in its southern and southwestern coastal regions for the past week. The opposition has criticized the government for neglecting the THK.

The THK currently has five planes in its fleet to fight against forest fires. But they cannot fly due to technical problems, Kılıçdaroğlu said, repeating that CHP mayors officially proposed to repair and operate these planes.

"Forest fires will unfortunately happen in the coming years, too. We, therefore, need this institution in order to prevent the repetition of wildfire disasters," he said, proposing a change on the status of the THK through a law. "We are ready to give all sorts of support should the government decide to introduce a legal amendment on the matter."