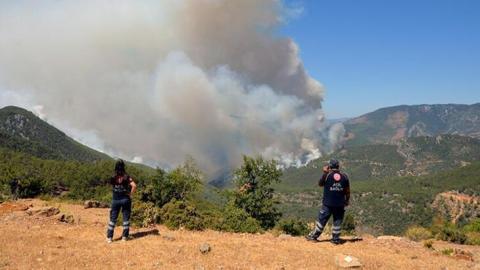 The Ankara Chief Public Prosecutor's Office has launched a probe into social media posts that asked for foreign help with the hashtag "Help Turkey" amid the massive wildfires.

In a statement on Aug. 5, the prosecutor's office argued that the posts were trying to show the country as "incapable" and "attempted to create panic, fear and concern among the public."

"As a result of an examination, it has been determined that some individuals and groups are trying to create anxiety, fear and panic among the people and humiliate the state and government of the Republic of Turkey through real or bot accounts," said the statement.

These accounts disseminated "unreal content" on the fires and tried to create an environment of "chaos by provoking social media users who were sensitive about the subject," said the prosecutor.

These accounts were previously used by terrorist organizations with similar methods before, it added.

It was determined that a multiple strategy was implemented actively using Twitter, it said, noting that disinformation and fake news was at the forefront.

"It has been evaluated that visual and written content that negatively affects the morale and motivation of the relevant public officials and volunteers fighting the fire in the efforts to extinguish the fire by following strategies such as putting unfounded allegations and news into circulation, causing the people of the region to despair, and showing that the state is incapable of fighting the fire constitutes a crime," said the statement.

The prosecutor launched the charges of "insulting a public employee," "insulting the president," insulting the government and the state," "creating concern, fear and panic among the public" and ...