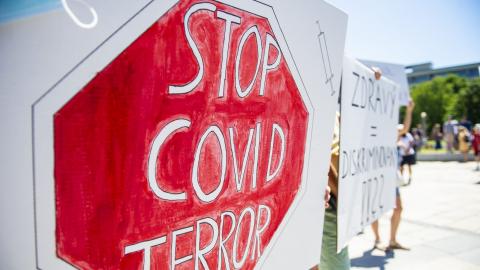 To many, this comes as no surprise. Observers point out that a peculiar "question everything" mentality has taken hold among Slovaks - a reference to the motto of RT, the television channel and website formerly known as Russia Today that's described by the New York Times as "a case study in the complexity of modern propaganda".

"There are so many different actors in Slovakia, from politicians to various outlets, that actively peddle disinformation," analyst Katarina Klingova from GLOBSEC, a think tank, tells BIRN.

According to Klingova's research, Slovaks are the most conspiracy-prone nation in Central and Eastern Europe, and thus easy prey for peddlers in lies who are on the lookout for both financial and political gain. But independent fact-checkers have found a way to pinch holes in the stuffed pockets of purveyors of disinformation, bringing the fight to the very source of conspiracies.

Slovaks, among them many anti-vaxxers, in front of parliament at a protest against vaccination and measures to contain the COVID-19 pandemic on July 23, 2021 in Bratislava. Photo: TASR - Pavol Zachar Money talks

Thousands of slowly expiring vaccines are sitting in warehouses as nearly a third of Slovaks continue to believe that the pandemic "is a planned operation by the hidden forces/elites to control the population", the GLOBSEC Trends 2021 report reveals.

"It's a continuous trend," Klingova explains. "A lot of Central Europeans believe in all kinds of conspiracy theories. On average, 37 per cent think that official figures of people infected by COVID-19 are inflated and that the authorities are lying."

Slovaks, deeply suspicious of the mainstream media and public health authorities, sit well above that...