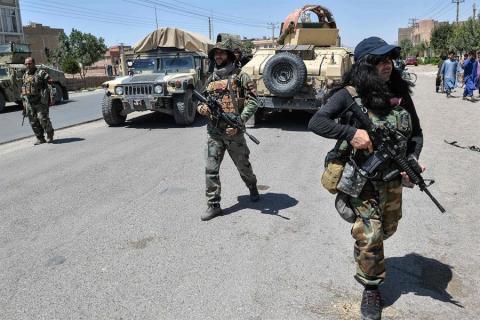 The Taliban warned on Aug. 4 of more attacks targeting Afghan government leaders, a day after the defence minister escaped an assassination attempt and as the insurgents fought to take control of a string of besieged cities across the country.

A bomb-and-gun attack on Defence Minister Bismillah Mohammadi Tuesday night brought the war to the capital for the first time in months.

But fighting has raged in the countryside since May, when foreign forces began the last stage of a withdrawal due to end later this month.

The Afghan and U.S. militaries have stepped up air strikes against the insurgents, and the Taliban said Wednesday the Kabul raid was their response.

"The attack is the beginning of the retaliatory operations against the circles and leaders of the Kabul administration who are ordering attacks and the bombing of different parts of the country," Taliban spokesman Zabihullah Mujahid said in a statement on social media.

It represents a major escalation by the Taliban, who have largely refrained from large-scale attacks in the capital since starting talks with the US on their troop withdrawal.

A first bomb exploded in the centre of Kabul, sending a thick plume of smoke into the sky, AFP correspondents reported.

Less than two hours later, there was another loud blast followed by smaller explosions and rapid gunfire, all near the high-security Green Zone that houses several embassies, including the U.S. mission.

The minister was safe and Afghan forces repelled the attackers, but interior ministry spokesman Mirwais Stanikzai said eight people were killed and many more wounded.

A security source said the insurgents detonated a car bomb before storming a lawmaker's house, from...