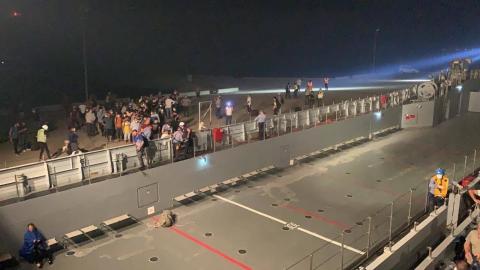 "Flames have entered the thermal power plant," the Mayor of Milas, Muhammet Tokat, said on Wednesday night on Twitter, adding that the staff were evacuated.

Local authorities said on Thursday that the flames were now under control but experts warned about harmful gases spreading to the atmosphere as a result of the coal inside the plant.

"It is alleged that there are 40,000 tons of coal stock at the thermal power plant. If this is true, it poses a very serious risk of air pollution for human health in the region," a former undersecretary at the Ministry for Environment, Professor Mustafa Ozturk, said on Twitter.

He urged people not to leave their houses and keep their windows closed. "The pollutants that will come from the arbitrary burning of the coal are the pollutants PM10, SO2, CO, NO2. These pollutants are very dangerous for health," he wrote.

Locals were evacuated by the navy because of the threat of explosions and poisonous gases.

"As the forest fire in Mugla's Milas district approached the thermal power plant in the region, our citizens who gathered at the dock are being evacuated to safe regions with landships belonging to our Naval Forces," the Defence Ministry tweeted, sharing photos of the evacuation.