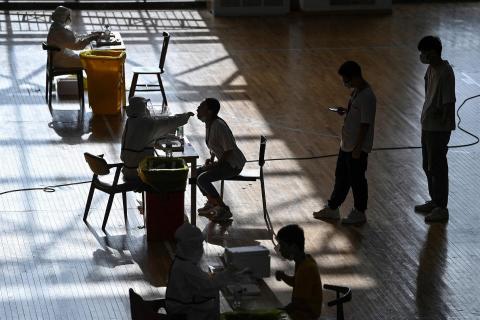 The more infectious strain is driving a resurgence in the pandemic, especially in the Asia-Pacific region where Thailand, Indonesia and Japan continued to see new records and the city of Melbourne entered yet another lockdown.

But as more of the world gets vaccinated - particularly in wealthy countries - deaths have risen at a slower rate, up 20 percent since July, the data show.

China "will strive to deliver two billion doses of vaccines to the world" this year and pledges $100 million (85 million euros) to the Covax system for distributing jabs to the poorest countries, President Xi Jinping said in remarks reported by state broadcaster CCTV.

After months in which Beijing could boast of its success in containing infections, authorities there are again battling a rise in cases - including in Wuhan, the city of 11 million people where the first mass COVID-19 outbreak occurred.

Overwhelmed mortuaries are renting refrigerated containers to store bodies, while medical and other frontline workers are exhausted.

"I've seen our personnel faint quite a few times lately so fatigue is definitely starting to set in."