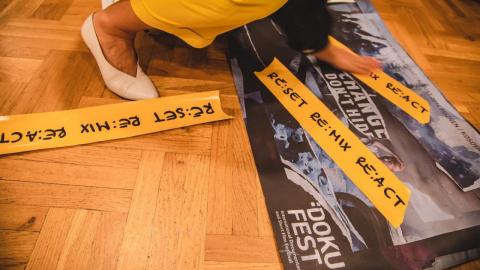 It was the opening night of the first edition of the Kosovo film festival, DokuFest, planned to be held in the garden of a Prizren cinema, the Lumbardhi, almost a ruin at the time.

"The first night, before the opening, we had unprecedented rain … we were soaking wet and had to leave the garden of the Lumbardhi cinema and go inside," DokuFest's artistic director and co-founder, Veton Nukollari, recalls with a smile.

"But we opened it nonetheless and screened the films … 30 films, mainly from Kosovo, a few from Macedonia and Albania, and some from Bosnia and Herzegovina," he adds.

That first-ever DokuFest lasted two-and-a-half nights, relying on borrowed technical equipment, and an old cinema saved by people who could not forget the summer nights they had spent watching films there under the stars as children.

Fast forward 20 years and DokuFest shows 200 to 300 films a year selected from around 3,000 applications. It has gone beyond being just a film festival and lasts more than one week, from August 6 to 14, 2021.

Now a trademark of the city of Prizren, a festival that intertwines culture with the ancient city includes other activities, including its famous concerts, DokuNights, a mini-festival within a larger concept.

DokuFest started as an attempt to brighten cultural life in what was then a very gloomy post-war Kosovo. There was no specific idea or plan. But over the years it has turned into a key factor powering the development of an increasingly successful film industry in Kosovo.

Displaced, produced and directed by two important figures in DokuFest, was the first film from Kosovo ever to be shortlisted at the Cannes film festival, this year.

Meanwhile the short film 4-Pills at Night by DokuFest alumni...