Master woodworker wants to open museum for his collection 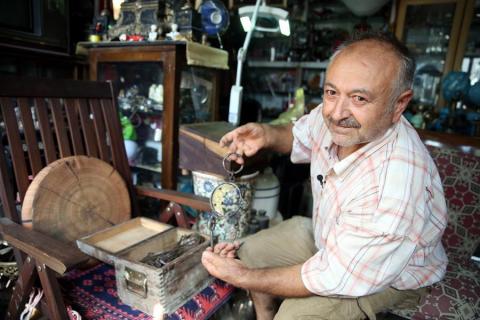 Bekir Başar, a retired woodworker living in the northwestern province of Sakarya, wants the antiques he has collected over the years to be transferred to future generations at a museum.

Having been interested in collecting antique items since his childhood, the 58-year-old Başar started to collect antiques by visiting vintage dealers, scrap dealers and flea markets all over Turkey.

After collecting a large number of belongings mainly from the Ottoman period and the first years of the Turkish Republic, Başar built a 30-square-meter wooden place next to his house to preserve his antique pieces, which also include the ones from the recent past.

Speaking to the state-run Anadolu Agency, Başar said that he continues his hobby of collecting, which he started in his childhood, to this day, and that he gave support to two museums established in Malatya.

Explaining that he visited the antique shops, vintage shops and flea markets in many cities, Başar said: "I buy the materials to be melted in the scrap and save them. If I have a museum, they will be displayed there. That is my goal."

Stating that he also repairs roofs in addition to his woodworking skills, Başar said that he bought and exhibited old newspapers, magazines and materials waiting to be thrown on the roofs of old houses.

Stating that some of the items he collected were not intact and that he found their original forms and restored them, Başar said: "I cannot abandon this job as long as I live because I enjoy it. I drink my tea and...