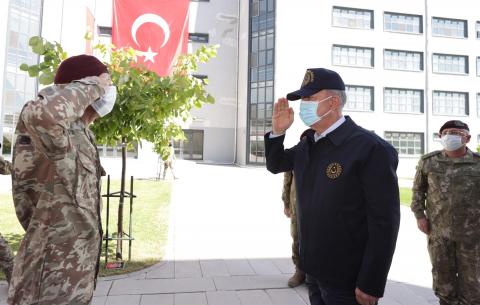 "Turkish Armed Forces' story of heroism and sacrifice is not over, it continues. Mehmetcik (Turkish soldiers) continues to make history," Minister Hulusi Akar said at an oath-taking ceremony for Maroon Berets who have successfully completed their 47-week-long special training in Ankara.

Akar emphasized that the fight against terrorism, which began on July 24, 2015, has continued through the Claw operations.

The Claw operations are a series of military operations that Turkey launched in 2019 against terrorist organizations in northern Iraq, particularly the PKK.

Underlining that Turkey respects all of its neighbor's borders, sovereign rights, and laws, including those of Iraq, Akar added that the country will continue to stand by its Libyan and Azerbaijani brothers in their just cause.

Touching upon the recent developments in Afghanistan, Akar said, "We have done our best, within our means, so that our Afghan brothers and sisters can live in safety and prosperity."

Reiterating that the country has been working for 20 years to bring peace to Afghanistan, Akar added that Turkey has been operating the Hamid Karzai International Airport in Kabul for the last six years and wants to continue managing the airport to support Afghan brethren.<...