Wildfires rampage in Greek forests, cut large island in half 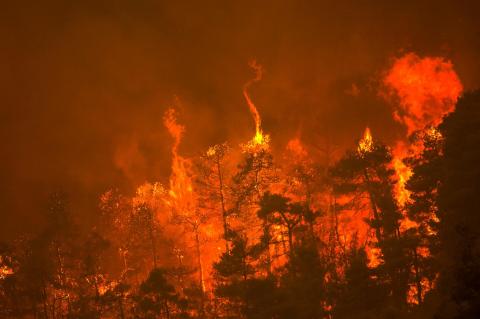 Three large wildfires churned across Greece on Aug. 7, with one threatening whole towns and cutting a line across Evia, the country's second-largest island, isolating its northern part. Others engulfed forested mountainsides and skirted ancient sites, leaving behind a trail of destruction that one official described as "a biblical catastrophe."

A flotilla of 10 ships, two Coast Guard patrols, two ferries, two passenger ships and four fishing boats, waited at the seaside resort of Pefki, near the northern tip of Evia, ready to evacuate more residents and tourists if needed, a Coast Guard spokeswoman told The Associated Press, on customary condition of anonymity.

Firefighters were fighting through the night to save Istiaia, a town of 7,000 in northern Evia, as well as several villages, using bulldozers to open up clear paths in the thick forest.

The fire on Evia forced the hasty on Aug. 6 night evacuation of about 1,400 people from a seaside village and island beaches by a motley assortment of boats after the approaching flames cut off other means of escape.

The other dangerous fires were one in Greece's southern Peloponnese peninsula, near Ancient Olympia and one in Fokida, in the Central Greece Region, north of Athens. The fire in Ancient Olympia moved east, away from the ancient site, threatening villages in a sudden flare-up on Aug. 7 afternoon.

North of Athens, the fire on Mount Parnitha, a national park with substantial forests, was still burning with occasional flare-ups, but a Fire Service spokesman told the AP late on Aug. 7 that containment efforts were "going well." Deputy Civil Protection Minister Nikos Hardalias told reporters on Aug. 7 night that firefighters hoped to contain the fire on Aug. 8.<...