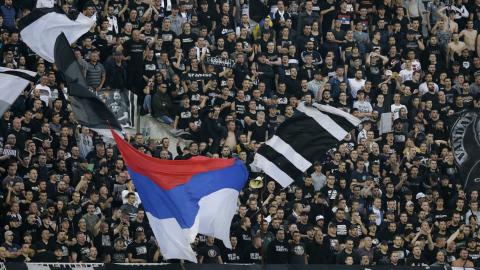 The referee of a match on Sunday evening between Novi Pazar FC and Belgrade club Partizan FC temporarily halted play because Partizan fans were chanting Ratko Mladic's name and a slogan celebrating the 1995 mass killings of Bosniaks from Srebrenica.

The match was being played in Novi Pazar in southern Serbia, a city mainly inhabited by people of Bosniak origin. Around the 60th minute, the Partizan fans started to chant Mladic's name and "Noz, zica, Srebrenica" ("Knife, wire, Srebrenica").

The Novi Pazar players did not want to continue the game, but after a 38-minute halt, the match resumed after the Partizan fans were moved out of the stadium. There has been no public announcements of any arrests related to the incident.

Chanting about Mladic and Srebrenica is not new in Serbian football, where there have long been links between hardcore fans and ultranationalism.

During the World Cup in Russia in June 2018, when Serbia played Switzerland, a group of fans appeared at the stadium wearing T-shirts featuring a portrait of Mladic and reportedly chanted "Kill the Albanians".

They were infuriated by two Swiss players of Kosovo Albanian origin who made Albanian double-headed eagle symbols with their hands when they scored, and after the match, Serbian nationalist fans in Vienna chanted "Noz, zica, Srebrenica".

A report by the European Commission against Racism and Intolerance in 2017 said that...