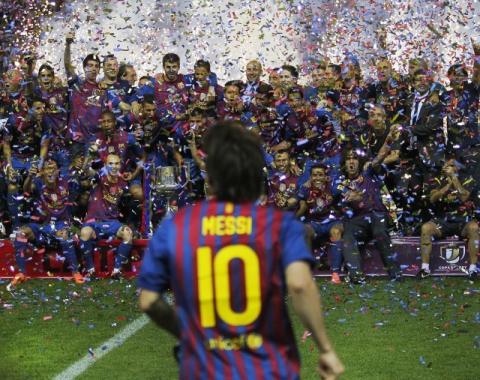 For more than two decades, 21 years to be more precise, the Argentinian was the alpha and omega of the Catalan club.

Many football fans will find it impossible to imagine what Barcelona will look like without Messi. More precisely, many believe that Barcelona will never be the force it was during the Argentinian's time.
Of course, Barca is a giant too big for its future to depend on just one player, but this farewell certainly had to happen.
However, hardly anyone will ever be as important for Barcelona as Messi was. He arrived at this Catalan club as a 13-year-old and signed his first contract on a handkerchief.
At the age of 17, he made his debut for the first team, next to Ronaldinho, and since then he has played 778 games for Barcelona scoring 672 goals with 305 assists recorded. He is a LaLiga record holder with 474 goals and 217 assists in 520 matches, 22 times he was the top scorer in various competitions, of which six times in the whole of Europe.
He won the "Golden Ball" for the best football player in the world six times, he received the UEFA award for the best player in Europe three times, and once he was chosen by FIFA as the player of the year.
Ten times he was a player of the season in Spain, where he won the same number of titles, with seven King's Cup trophies and eight Super Cups. He also won four Champions Leagues and three club world titles.
A statement that Messi was Barcelona, is ​​shown in the following statistics:
* Since his first-team debut in 2004, Barcelona has won 35 of the 96 titles This means that Messi participated in winning 36.4% of all the titles that Barcelona collected during 122 years of club's history;
* Barcelona has scored a total of 9,988 goals in 4,487 games. Messi...