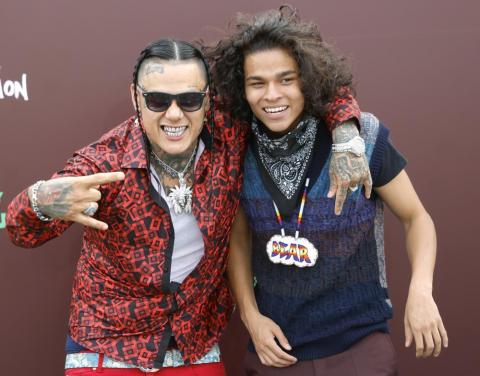 Two Indigenous filmmakers are smashing the caricatures and stereotypes of Native Americans, who since the earliest days of film and TV have often played supporting roles or been portrayed as bloodthirsty killers standing in the way of white, westward expansion.

Sterlin Harjo, a Seminole and Muscogee filmmaker from Oklahoma, teamed up with Taika Waititi, a Maori director from New Zealand, on "Reservation Dogs," a new series debuting Monday on FX on Hulu that features four rough-and-tumble teenagers who cuss, fight and steal their way toward adulthood in a rural Oklahoma town. Filmed entirely on the Muscogee Nation reservation in eastern Oklahoma, the network says the half-hour comedy is the first show on cable TV in which all the writers, directors and regular characters on the series are Indigenous.

"To be able to tell a real story about real people through comedy, it's about time," Harjo, who directed "Mekko" and "Barking Water," said during a premiere of the series this week in Tulsa. "There's been 130-something years of cinema and we're finally showing ourselves as human beings, which shouldn't be radical, but it is pretty radical today."

Devery Jacobs, a Mohawk actor from Quebec, Canada, who plays one of the show's lead characters, said working on a set with so many Indigenous actors and crew was a breath of fresh air.

"On a lot of projects, I was the only Indigenous person for miles," Jacobs said. "Stepping on the set of 'Reservation Dogs' and seeing my community around me, a community of fellow Indigenous folks from different backgrounds, it was truly being welcomed home.

"I'd never experienced it before, and it just meant so much to me, and I know it's going to mean so much to audiences across Turtle...