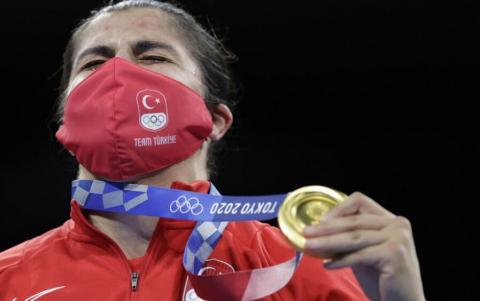 Turkish athletes bagged a total of 13 medals at the 2020 Tokyo Olympics, which ended on Aug. 8, making it the most successful Games ever for their country in terms of total medals won.

Turkey grabbed two gold medals, two silvers and nine bronze medals while also being represented for the first time in the final of some events.

On the 15th day of the Olympics on Aug. 7, Turkish athletes won three medals.

Another Turkish boxer Buse Naz Çakıroğlu also fought for gold earlier in the day but lost to Stoyka Zhelyazkova Krasteva of Bulgaria in the final of the flyweight category.

Çakıroğlu's silver was the first Olympic medal for Turkey in women's boxing, while Sürmeneli grabbed the first-ever gold for the country at the event.

Also on Aug. 7, karateka Uğur Aktaş grabbed the bronze medal in the men's 75-kg competition, increasing Turkey's total medals tally in karate at the 2020 Olympics to four, including a silver medal from Eray Şamdan and bronze medal from Ali Sofuoğlu and Merve Çoban.

The 13 medals won in Tokyo was the highest-ever number for Turkey in the 23 Olympic Games its athletes have competed in so far. The country also enjoyed first-ever medals in some events in addition to archery and boxing.

Men's wrestling, an event Turkey is accustomed to winning medals, was not the country...