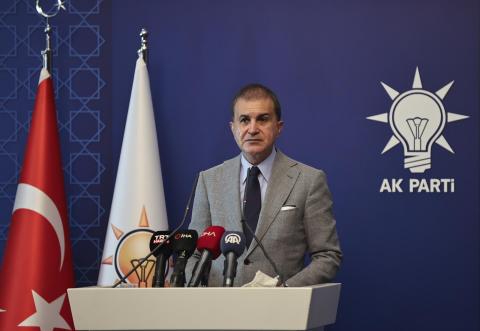 Nobody should consider Turkey as a refugee camp, the ruling Justice and Development Party's (AKP) spokesperson Ömer Çelik said on Aug. 9, elaborating on recent discussions after Afghans started fleeing to Turkey.

"State departments are having talks with all relevant parties. There is a division of roles between state institutions. Turkey embraces people fleeing death. Other than that, we do not allow it to be abused," he told reporters at a press conference.

"Turkey is not anyone's refugee camp. No one should think of this region as a concentration camp," Çelik added.

Turkey is not capable to shelter further refugee influx, he said but emphasized that nobody should use "fascist language" while discussing the matter.

The country can protect its borders, Çelik said while objecting to the claims that thousands of Afghans were easily getting into Turkish territory.

His remarks came over the U.S. new resettlement plan for Afghans who have assisted the U.S. officials and troops during its mission in Afghanistan since 2009. The plan names Turkey among the application spots for eligible Afghans who want to migrate to the U.S.

Ankara will not accept the "irresponsible" decision taken by the U.S. regarding the resettlement of Afghan refugees because the plan addresses Turkey as the target country for application of the migration procedures, Foreign Ministry spokesperson Tanju Bilgiç said on Aug. 3.

In a written statement, the spokesperson recalled that the U.S. Department of State announced on Aug. 2 that Afghan nationals and their families, who have worked for the U.S. Government, U.S.-based NGO's and press corps, will be allowed to apply within the framework of the Refugee Admissions Program Priority 2...