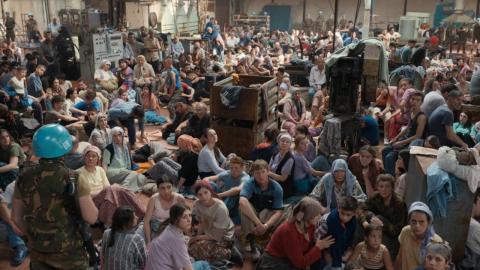 Director Jasmila Zbanic's Oscar-nominated 'Quo Vadis, Aida?', about a Bosnian translator for the United Nations trying to save her family amid the violence and chaos of the Srebrenica genocide, is one of several films focusing on armed conflict that will be screened at the 27th Sarajevo Film Festival, which opens on Friday.

The festival begins with the world premiere of Oscar-winning Bosnian director Danis Tanovic's new feature, 'Not So Friendly Neighbourhood Affair'.

The film, a comedy set in the Bosnian capital during the coronavirus pandemic, focuses on a dispute that erupts between Old Town cevapi shop owners when a Croatian tourist comes looking for "the best kebabs in Sarajevo".

Several other films at the festival explore topics related to the 1992-95 war in Bosnia and Herzegovina.

'The Last Tape from Bosnia' by Albert Sole tells the story of a woman who returns to Bosnia to try to bury the remains of her older brother, who was killed in the 1995 Srebrenica genocide.

'Disturbed Earth', an experimental documentary film by Kumjana Novakova and Guillermo Carreras-Candia, also focuses on Srebrenica, while 'Looking for Horses', by Stefan Pavlovic, is about the friendship that develops between a film-maker and fisherman who lost his hearing during the war.

The story of American writer Susan Sontag's visit to the Bosnian capital in 1993 to direct a play while the city was under siege is the subject of Nihad Krecevljakovic's documentary 'Don't Cry for Me Sarajevo'.

Other films with conflict themes include 'The Same Dream' by Vlad Petri, based on a true story about a Romanian soldier who came across a wounded girl during his first mission to Afghanistan.

"The director combines archival footage from the...