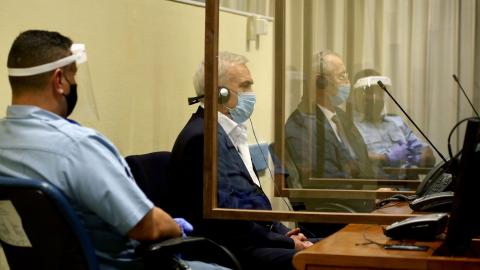 June 2021 was an unusually busy month for coverage of war crimes in the Serbian media, which doesn't usually report on the subject very often. Just a few weeks apart, two major verdicts were announced in The Hague that were highly uncomfortable for Serbia.

The first, the ruling that sentenced wartime Bosnian Serb Army chief Ratko Mladic to life in prison for genocide and other crimes, grabbed more of the headlines. The second, in the case of senior wartime Serbian State Security officials Jovica Stanisic and Franko Simatovic, received less coverage but was also highly significant.

The Stanisic and Simatovic verdict, which was finally published in full last week, was the first-ever conviction of top Serbian wartime officials for crimes during the wars that broke out during the break-up of Yugoslavia.

The verdict also confirmed more details that establish connections between Serbia, as a state, and the conflicts in Croatia and Bosnia and Herzegovina in the early 1990s. Serbia has long denied any direct involvement.

The UN's International Residual Mechanism for Criminal Tribunals sentenced Stanisic and Simatovic to 12 years in prison each for aiding and abetting crimes committed by a State Security Service special fighting unit in the Bosanski Samac area during the Bosnian war in 1992, but acquitted them of responsibility for other crimes committed by Serb units elsewhere in Bosnia and in Croatia.

This was a first-instance verdict, and Stanisic and Simatovic can appeal. However, the ruling confirmed that Serbia was involved, mainly through its police and security services, in the conflicts in Croatia and Bosnia and Herzegovina, and that Serbian President Slobodan Milosevic was part of the criminal enterprise to oust Croats and...