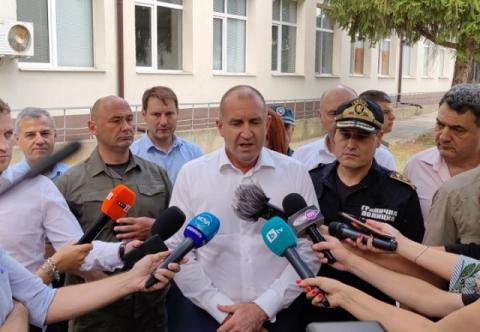 I plan to hold consultations with the parties, Bulgaria's President Rumen Radev said on August 13 during his visit to the Border Police Coordination Centre in Elhovo. It became clear from his words that he has not yet made a final decision on when and to which political force he would hand over the third mandate to form a government.

"I expect responsibility from all parties represented in Parliament. I want to see a clear commitment of the Bulgarian Parliament and from this it will become clear who works for the people and who sows chaos," Radev said.

"I plan to hold consultations with the parties. I will decide when and to whom to hand over a possible third mandate when I hear the ideas of the parties represented in Parliament to form a government," the head of state said.

Rumen Radev will ask the Parliament to update the budget.

"When will the Bulgarian Parliament update the budget? We cannot treat Bulgarian citizens irresponsibly. There are important issues that require the updating of this budget. We cannot leave people without financial support, without social support," Radev added.

The head of state also announced that this Parliament should set a date for the Presidential elections.

Radev checked today the measures that have been taken to protect the border and how Bulgaria is coping with the increased migration pressure. He visited Kapitan Andreevo border checkpoint. On the spot, he also got acquainted with the work of the Regional Coordination Centre of the Border Police in Elhovo.

Earlier in the day, the head of state visited the Situation Centre at Kapitan Andreevo border checkpoint. The centre was established there in 2016 under an agreement between Bulgaria, Turkey and Greece, namely to coordinate the...