Conflagration – The “domino” that burned 130,000 hectares of forest 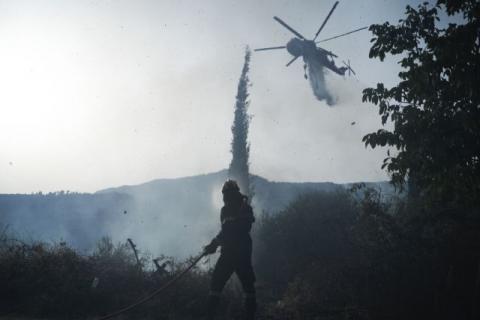 The fire in Varybobi caused a catastrophe in Northern Evia. The salvation of Ancient Olympia led to the uncontrolled resurgence in Varybobi, the difficult containment of which increased the destruction in the Municipalities of Mantoudi and Istiaia. And the effort to reduce the burning areas in Limni, Kapandriti, and Gortynia increased the line of fire in Gythio and Melpeia, in Messinia.

This "vicious cycle" of fire fronts in Southern Greece on the fateful eight days of August 3-11 caused, in combination with the surprise of the forest firefighting forces, as well as with the pathogenesis of the Fire Brigade , the unprecedented incineration of approximately 130,000 hectares and the destruction of thousands of properties that has shocked public opinion.

The controversial hierarchy of fires, the fragmentation of air and ground forces, the problematic doctrine that "fires are extinguished only by air", the operational weaknesses of many firefighters who simply pour water blindly and do not intervene in the heart of the blaze play a decisive role in the frightening magnitudes of the fiery catastrophe, combined with the unprecedented weather conditions.

Like the confusion in the coordination system of the fire brigade where politicians, without operational experience, get involved. Causing discomfort to operational officers and a peculiar redistribution of roles.

Statement of ignorance because of Parnitha

With an indicative report that the head of the Fire Brigade, Mr. Stefanos Kolokouris, who was accused in the case of the Mati disaster because he was two hours late to go to the scene of the tragedy, had become for many days a mere supervisor of the fire in Parnitha, in case there were renewed flare...