Turkey in dialogue with all sides in Afghanistan, including Taliban: FM 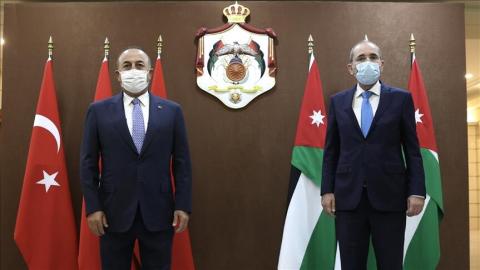 Turkey is continuing its dialogue with all the sides in Afghanistan, including the Taliban, the Turkish foreign minister has said, vowing that Ankara's efforts for peace, stability and prosperity of the war-torn country will endure.

"We maintain our dialogue with all parties, including the Taliban. Likewise, important personalities such as Abdullah Abdullah and Hamid Karzai, who were part of the negotiations in the past, are still in Kabul and are making preparations for talks with the Taliban," Foreign Minister Mevlüt Çavuşoğlu told reporters at a press conference with Jordanian Foreign Minister Ayman Safadi in Amman on Aug. 17.

Qatar is playing an important role in efforts for a smooth transition through the establishment of an interim government, Çavuşoğlu said, underlining that the need for calming down the situation in Afghanistan following the Taliban's lightning advance and takeover of Afghanistan over the weekend.

"We view positively the messages that the Taliban has given so far, whether to foreigners, to diplomatic individuals, or its own people. We hope to see these in action as well," he said. "We, as Turkey, will continue to support the economic development, stability, peace and tranquility of brotherly Afghanistan."

Citing the panic and chaos in Kabul after the Taliban's takeover of the control of the country, Çavuşoğlu expressed sorrow over the death of some Afghan nationals during the stampede at the international airport. "Of course, we do what is necessary for those who want to leave the country safely," he said, recalling Turkey has the responsibility of operating and security of the airport.

Many countries, including Turkey, have evacuated some of their citizens from Afghanistan on Sunday...