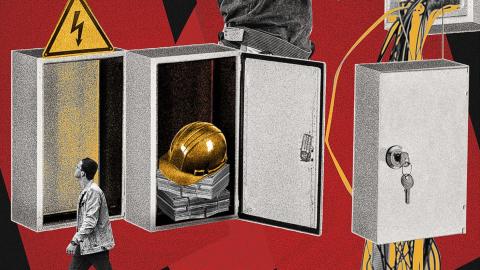 "The moment he started climbing, the 10-kV current hit him. He died immediately," the verdict read. His mother, sister and brother had sued his employer for compensation.

Vlinga is not the only employee of the Operator for the Distribution of Electricity, OSHEE, who lost his life lately on the job or suffered serious accidents.

Data obtained by BIRN through Freedom of Information requests, FoIs, show that over the last two years, courts in Fieri issued five verdicts finding OSHEE responsible for damages incurred due to lack of workplace safety.

They obliged the company to pay a total of 190 million leks, or 1.5 million euros, in compensation.

Experts told BIRN these verdicts point to a serious lack of workplace safety in publicly owned companies, which not only caused unnecessary deaths and injuries but also incurred costs that are then passed on to the public and consumers.

"Publicly owned corporations have formal offices responsible for job place safety and workers' health, but these structures are often non-functional," Edison Hoxha, director of the Centre for Labour Rights, an NGO based in Tirana, said.

"In public institutions, both at central or at local level, such structures are [often] absent, even formally," he added.

OSHEE did not respond to BIRN's request by time of publication for comments about workplace safety and court decisions that found it responsible for accidents.

OSHEE is one of the largest corporations in Albania. Its revenues for 2019, were 56 billion lek, equal to 431 million euros.

Data from the State Inspectorate for Labour and Social Services show that, between 2014 and 2020, some 28 accidents occurred in the electricity, gas and...