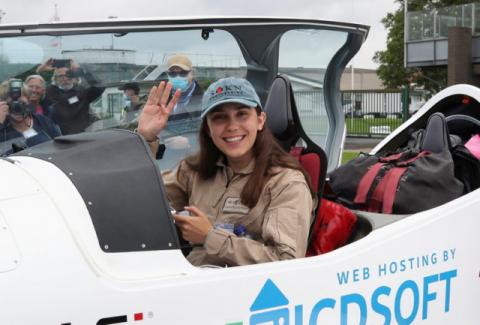 "One of my biggest dreams (along with flying around the world) is to become an astronaut."

Said 19-year-old Zara Rutherford, who embarked on an impressive adventure on Wednesday afternoon. The teenager flew from an airport in western Belgium for her solo trip around the world. It aims to cross 52 countries on five continents in the next two months or so.

If she succeeds, she will become the youngest woman to fly around the world on her own. For this purpose, her route crosses the Equator twice - over Colombia and Indonesia (a mandatory requirement for a Guinness World Record to be recognized).

The seven-meter ultralight Shark aircraft has the flags of Great Britain and Belgium because Rutherford has dual citizenship. However, the Bulgarian flag is also there, as the main sponsor of the challenge is the Bulgarian technology company ICDSoft.

"We fully understand and support the passion of a young woman with a wonderful cause - gender equality, who also wants to encourage young people to take up air sports. Come on, Zara," said the Bulgarian company.

Along with the record, the teenager has set a goal to inspire more girls and women to focus on science and aviation.

"It's a dream I've had for a long time, but it always seemed unrealistic. When I decided to take a year off before I started university, I realized I had all this time and I could do something crazy with it," said Rutherford.

Flying is in her blood because her parents are pilots. "It was hard for me to accept at first, but now I fully support her," said her mother, Beatrice de Sme.

Rutherford started flying lessons when she was 14 but officially received a license last year. That is why, according...