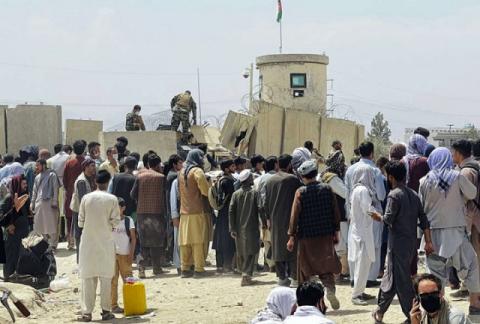 Now, as the Taliban completes a rapid takeover of the country following the US and NATO decision to withdraw, his predictions may have already started to materialise.

An estimated 400,000 people in the country have been forced to flee their homes since the beginning of the year, according to the United Nations' refugee agency (UNHCR).

Relief organisations have raised the alarm on what could only be the beginning of a much bigger humanitarian crisis with devastating consequences for Afghans.

Caroline Van Buren, UNHCR's representative in Afghanistan, said between 20,000 and 30,000 people were leaving the country on a weekly basis.

"We are now seeing a large number of people leaving Afghanistan: flights are full and these people, of course, are people who have travel documents, we are able to get visas, who have residency permits in other countries," she said. "But now we're also seeing a trend of people who are moving in an irregular way, people who are fleeing for their own safety without travel documents and they are much at risk for exploitation."

With more Afghans seeking shelter or looking to escape, there are concerns in Europe that migrant numbers will increase.

The European Union is still scarred by the migration crisis of 2015-16, which saw hundreds of thousands of arrivals from Syria. The episode sparked intense disputes within the 27-nation bloc on sharing the migrant burden among themselves, with populist...