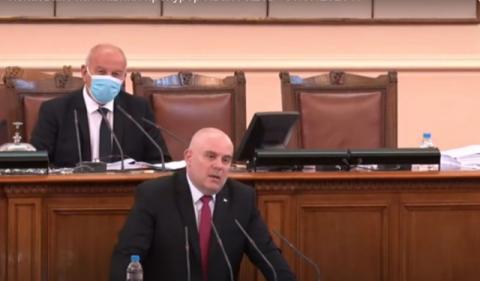 Prosecutor General Ivan Geshev was given a hearing by the parliamentary Legal Affairs Committee at the invitation of its Chairperson Andrey Mihaylov on Thursday.

Commenting on video footage of police brutality shot at the time of anti-government protests in 2020, Geshev said any violence is unacceptable. "What I saw is inadmissible," he said. The Prosecutor General refused to comment on the facts of the case because he has no control functions in specific pre-trial proceedings.
Geshev said he watched the video for the first time last Friday, shortly after it was first shown during a sitting of the parliamentary committee probing police brutality during the 2020 protests, and then went viral.

The video with shocking scenes of police kicking and punching handcuffed and helpless citizens away from the public eye behind the columns of the Council of Ministers' building in central Sofia, caused an outrage. Parliament held an extraordinary sitting August 17 to hear the Interior Minister about the actions taken to establish and punish the violent officers.

It transpired there that an Interior Ministry probe into complaints of police brutality during the protests had only been perfunctory and that a check by prosecutor's office had found no wrongdoing.
Geshev explained that committees in the legislature cannot exercise parliamentary oversight of the judiciary. He argued that a provision to the contrary effect in the National Assembly's Rules of Procedure contravenes the Constitution and that he would ask the Constitutional Court to declare it unconstitutional. "Since the effective provision of the Rules of Procedure says I can be invited, I am here with part of my team out of respect for the institution and the MPs," he added.
"I hope we...