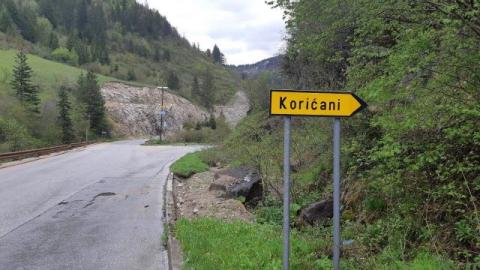 Relatives of the Bosniaks and Croats killed at the Koricani Cliffs by Bosnian Serb forces will mark the 29th anniversary of the massacre on Saturday by throwing roses into the deep mountain pit where their loved ones' bodies were dumped after they were killed in 1992.

"They threw the bodies into the pit and buried them with rocks," said Teufik Kulasic, whose brother Abaz was one of the people from the towns of Prijedor and Kozarac who were taken by Bosnian Serb forces from detention camps to the Koricani Cliffs and shot.

Kulasic said he heard about his brother's death in a radio that said that detainees who were being transported in a convoy by Bosnian Serb forces had been killed.

"We waited a long time for their remains to be discovered. It took around ten years," Kulasic said.

He explained that the remains of some of the victims have yet to be found.

"We really hope we will find a big grave in the Kozarac area too - you know, hope never dies," he said.

Satko Mujagic, a former detainee from Prijedor, said that dozens of his neighbours from Kozarac were killed at the Koricani Cliffs.

"All of them were 'ordinary' people, civilians, whose houses were pillaged and burned while they were being held in detention camps," Mujagic said.

The Hague Tribunal sentenced wartime Bosnian Serb policeman Darko Mrdja to 17 years in prison after he admitted involvement in the massacre at the Koricani Cliffs.