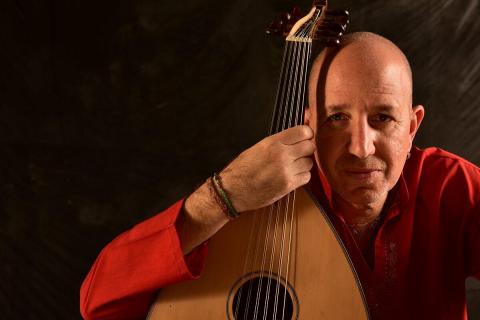 "Oriental Circle - Hicaz Saz Semaisi," one of the 10 songs in the album was also chosen to be included in the compilation album, "Top of the World," which is released every year by the British-based magazine Songlines. The album will be given with the 171st edition of the magazine to be out on Sept. 3.

The album, in which 17 musicians from different countries such as Turkey, Germany, Denmark, Australia and Israel bring together the recordings they made in their own countries during the pandemic, consists of 10 instrumental songs in the ethno-jazz genre in Turkish and Hebrew. The songs include "Norwegian Oud" (A reference to the world-famous band Beatles' song 'Norwegian Wood'), "Heal," "SMS to India," "Sketches," "Wish for Peace," "Lo Amarti," "Hicaz Saz Semai," "Give Me Some Light," "My Father" and "Shecharchoret."

"The main work Norwegian Oud is an ethnic instrumental arrangement of the Beatles' well-known song "Norwegian Wood" that was arranged by pianist Eyal Lovett and myself," said Muallem, who is of Israeli origin, about the album.
"My dear father, retired judge and musicologist David Mualem passed away on March 31, 2021. I had a deep connection with my father because of our common love of music and writing. After his death, I wrote the work 'Father,' dedicated to his memory and legacy. The work was recorded and filmed in Israel and Turkey with the participation of musicians who knew and experienced my father closely, led by the 'Mawal' singer Ziv Yehezkel. Also, on the album, you can listen to my Israeli-Turkish collaboration with the Turkish singer ChanCe in an original arrangement...