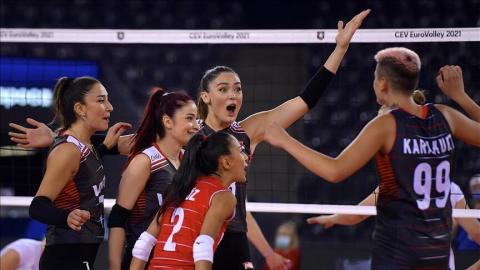 The Turkish Women's National Volleyball Team claimed the fourth group game with sets of 25-19, 25-12, and 21-15 at BT Arena in Cluj-Napoca, Romania.

Turkey will play its last group game against the Netherlands tomorrow.

Twenty-four teams are competing in four groups. The top four teams in each group will advance at the end of the group stage.

The Round of 16 and quarterfinals will be played in Bulgaria and Serbia, and the semifinals and final will be hosted by Serbia.

The group stages are scheduled to end on Thursday, and the three-day Round of 16 is set to start Saturday.

Quarterfinals and semifinals games will be played on Aug. 31 and Sept. 3, while the final and the third-place match will be held on Sept. 4.