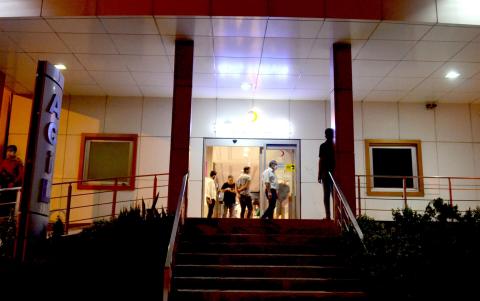 Amid promises by the government to curb violence against medical staff, three health care workers in the Mediterranean province of Mersin's Mezitli district have been attacked recently by the family of a deceased COVID-19 patient.

Following the death of H.Ç., a COVID-19 patient who was reported to have been treated in the intensive care unit for 24 days in a private hospital, the relatives of the deceased went to the medical center and beat the personnel on duty.

Sent to the scene upon notifications, a large number of police teams took extensive security measures in and around the hospital, but the attackers could not be caught yet. Health care workers who suffered slight injuries on their bodies were treated as outpatients.

This worrying trend made headlines again this week when a group of health care workers was attacked by a patient's father who argued with the hospital staff on the ground that his daughter "felt pain while getting the injection."

Violence often takes place at hospitals in Turkey, but reports suggest that violence and harassment against health care workers have been on the rise during the pandemic.