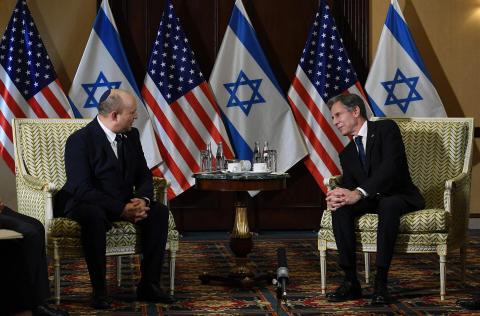 Israeli Prime Minister Naftali Bennett is aiming to dissuade President Joe Biden from returning to the Iran nuclear deal when the two leaders meet at the White House on Aug. 27.

The meeting, originally scheduled for Thursday, was postponed for one day as Biden focused his attention on dealing with the aftermath of a suicide bomb attack at the Kabul airport that killed at least 13 U.S. troops.

"On behalf of the people of Israel, I share our deep sadness over the loss of American lives in Kabul," Bennett said in a statement posted on social media. "Israel stands with the United States in these difficult times, just as America has always stood with us. Our thoughts and prayers are with the people of the United States."

Before arriving in Washington, Bennett made clear that he would push against the Iran deal, arguing Tehran has already advanced in its uranium enrichment, and sanctions relief would give Iran more resources to back Israel's enemies in the region.

The Israeli leader met separately Wednesday with Secretary of State Antony Blinken and Defense Secretary Lloyd Austin to discuss Iran and other issues. The visit is his first to the U.S. as prime minister.

Bennett told his Cabinet before the trip that he would tell the American president "that now is the time to halt the Iranians, to stop this thing" and not to reenter "a nuclear deal that has already expired and is not relevant, even to those who thought it was once relevant."

Biden has made clear his desire to find a path to salvage the 2015 landmark pact cultivated by Barack Obama's administration but scuttled in 2018 by Donald Trump's. But U.S. indirect talks with Iran have stalled and Washington continues to maintain crippling sanctions on...