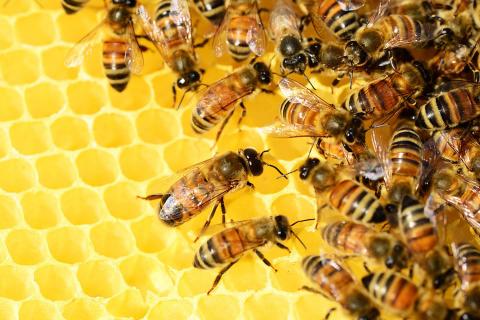 Lukovica – A 3D model of the Carniolan honey bee, native to Slovenia, was unveiled in the Brdo pri Lukavici Beekeeping Centre on Friday evening. The 1.5-metre model displays the bee in a 1:100 scale and its resemblance to the insect is more than 90% accurate, the Slovenian Beekeepers’ Association said.

The project will be used for educational purposes as well as to raise awareness about the Carniolan bee. It had been developed using state-of-the-art technologies, including the 3D imagining technique micro-CT.

The model is perched on a rotating platform and features movable parts. It also provides animated educational content in Slovenian and English.

Moreover, it comes with a 3D printed model of the bee for the blind and visually-impaired.

The project was unveiled by President Borut Pahor. Agriculture Minister Jože Podgoršek also attended the event, which the association described as its contribution to Slovenia’s EU presidency.