Evacuation of Turks from Kabul done in less than 48 hours: Minister 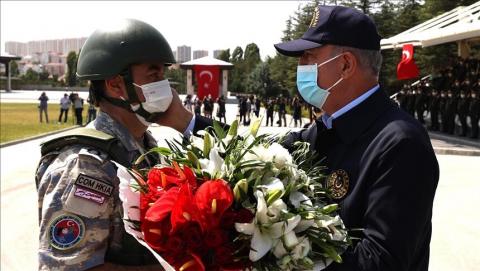 Turkish personnel and all Turkish citizens who wish to leave the country have been evacuated from Afghanistan's capital Kabul in a span of less than 48 hours, Turkey's national defense minister announced on Aug. 28.

At a welcoming ceremony in the capital Ankara for troops arriving from Afghanistan, Hulusi Akar said the evacuation was done through an air bridge between Kabul and Pakistan's capital Islamabad with eight airplanes and two helicopters.

The evacuation was completed days before the Taliban's Aug. 31 deadline for foreign forces to leave the country.

Akar added that all risks, threats, and developments in the war-torn country are being closely monitored, and Turkey has taken all the necessary initiatives and measures for all scenarios.

"Our armed forces have been carrying out their mission with extraordinary efforts to contribute to world peace in several areas, from Libya to Kosovo, from Afghanistan to Bosnia and Herzegovina, and from Qatar to Somalia under U.N., NATO, OSCE (Organization for Security and Cooperation in Europe) and bilateral agreements," Akar said.

He added that Turkey is expanding the scope of its influence and interest every day, and became a mover in international relations.

Strongly condemning Thursday's deadly terrorist attack outside the international airport in Kabul, Akar extended his condolences for the 170 U.S. and Afghan citizens who lost their lives in the bombings.

The attack on Thursday targeted areas just outside the airport, where crowds have been gathering, seeking a way out of the country.

The ISIL-K terrorist group, the Afghan affiliate of Daesh/ISIS, claimed responsibility for the attack.

The Taliban taking power in Afghanistan led to...