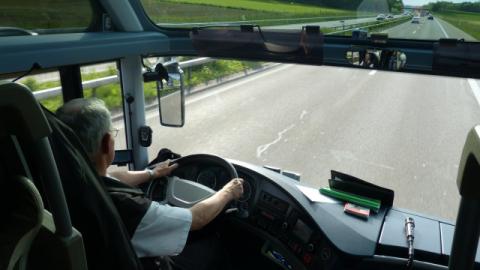 The driver was obviously extremely tired, but refused a longer break and drove in the rain and in the dark.

A driver of a bus traveling from Sunny Beach to Sofia of the Union Ivkoni company was fired after falling asleep at the wheel, endangering the lives of nearly 50 passengers. The story was told by BNT, and according to eyewitnesses, the bus went to the guardrail twice.

The carrier company announced that the driver was fired and apologized to the passengers, national television added.

"The most nightmarish moment for me was the second stagger to the guardrail on the right. There was such panic on the bus, everyone was screaming hysterically: Stop, stop immediately at the first gas station. He refused to stop," said Eleonora Hristozova, one of the passengers on the bus, Wednesday night.

However, the driver stopped briefly at a gas station, where a young family chose to get off and look for another way to return to Sofia. According to Eleonora Hristozova, the driver was obviously extremely tired, but refused a longer break and continued to the capital in the conditions of heavy rain.

Valeri Georgiev is another passenger on the bus, who sat next to the driver and talked to him all the time so that he would not fall asleep again.

"However, at times he started to lose control. I myself was quite scared to see this. We did what we could," Georgiev told BNT.

There was no second driver, as required by law for the bus, the passengers claim, although according to documents of the carrier - Union Ivkoni - this is not the case.

It is also remarkable that the same driver leaves again at 05:30 in the morning back to Sunny Beach with the same bus.

According to BNT, the...