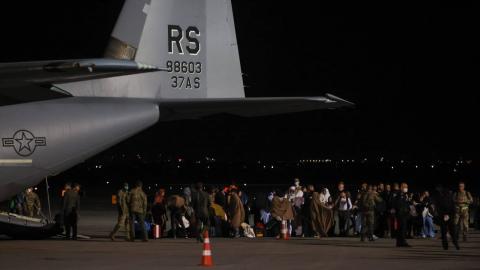 Refugees fleeing the Taliban takeover in Afghanistan were flown in to Pristina airport on Sunday evening, where they received medical check-ups before being sent onwards to the town of Ferizaj/ Urosevac.

They will be staying in a former camp built by the US-Turkish construction company Bechtel Enka, situated in front of the US military base Bondsteel, after having arrived via a US military plane.

Kosovo Interior Minister Xhelal Svecla announced that a total of 111 people had arrived from Kabul.

"The number of Afghan nationals who are here today is 111, women, children and the elderly who are relatives of NATO collaborators in Afghanistan," Svecla said, adding that the rest of the group were accepted to arrive from Monday onwards.

Svecla announced that they will be vaccinated against COVID-19.

Kosovo's President, Vjosa Osmani, and Prime Minister Albin Kurti, as well as QUINT countries' ambassadors to Kosovo [represending the US, UK, France Germany and Italy] were at the airport to welcome the first group of refugees.

"Today we show in front of all of them that we have not only opened our doors but also our hearts because as people who come from genocidal rule we understand very well what it means to be forced to leave your home," Osmani said, referencing Kosovo Albanians' trauma under Serbia's harsh rule in the 1990s.

"When it comes to humanitarian issues and when it comes to partners and allies such as the US and NATO, the question is not why but how. So, all the issues [about the refugees] we are discussing are of a technical and logistical nature," PM Kurti added.

The US Ambassador to Kosovo, Philip Kosnet,t said at the airport that, "by temporarily hosting Afghans en route to permanent homes elsewhere,...