Poland Delivers Another Blow to International Rights of Refugees 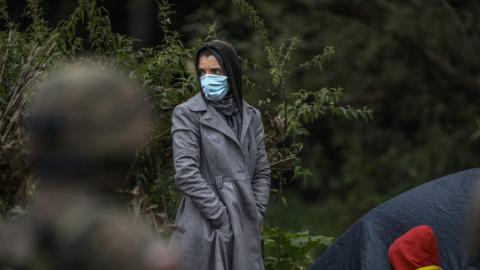 Yet help is just 500 metres away: on the Polish side, a group of activists has been on standby for days, bringing bags with food, water, medicines and thermal blankets (nights are now cold and it had been raining). But a line of Polish border guards constantly blocks access. Not even the medic on the ground, Paulina Bownik, who travels daily from the city of Bialystok about an hour away to check on the migrants, is allowed to pass through.

She told BIRN she was afraid it was only a matter of time before one of the migrants dies.

The day BIRN visited, on August 24, opposition parliamentarian Franciszek Sterczewski asked to be let through with medicines, but to no avail. In the afternoon, the politician unexpectedly sprinted through the lined-up border guards carrying a blue bag with medicines, but was quickly encircled by soldiers halfway to the border. Another opposition MP asking to deliver medicines, Katarzyna Kretkowska, was also denied access, as BIRN witnessed.

All 32 migrants in the group stuck on the border, some of whom claim they are from Afghanistan, have repeatedly indicated they want to apply for asylum in Poland.

The Polish government, however, argues they are currently on Belarusian territory, meaning they should apply for asylum in that country. It refuses to register any asylum claims from individuals in the group or provide them with any assistance.

The situation of the migrants in Usnarz Gorny is just the tip of the iceberg in what observers claim to be systematic breaches of refugee rights by Poland, especially via pushbacks, which evidence suggests the government has been conducting for the past few weeks.

While legal experts are adamant that the pushbacks by Poland are contrary to refugee rights...

In September, the Growth of Foreign Tourists in Bulgaria was Nearly 40% for the Year
Polish PM: EC risks World War 3