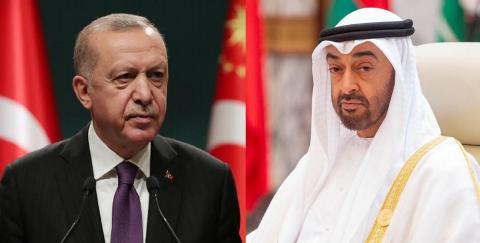 In a sign of intensified mutual efforts to mend the years-long broken ties, the leaders of Turkey and the United Arab Emirates held a phone conversation to discuss the bilateral ties and regional developments.

"Relations between the countries and regional issues were discussed in the talks," a brief statement from the Turkish Presidency said without giving further details.

The UAE on Aug. 31 described a phone call between the leaders as "positive" and "friendly".

He said the contact between the two leaders was meant to open "a new phase" in relations as "the UAE seeks to build bridges, maximize commonalities and work together with friends and brothers to ensure future decades of regional stability and prosperity for all peoples and countries of the region."

Turkey and the UAE were in dialogue for narrowing the differences on a number of bilateral and regional matters, including Libya conflict, through the intelligence services. Ties between the two countries had derailed after the UAE had slammed Turkey's strong reaction against the coup staged by Abdel Fettah al-Sisi that led to the toppling of Egypt's first elected President Mohammed Morsi in mid-2013.