Vučić arrived in Slovenia; "Bled Forum in the shadow of the Open Balkans" PHOTO 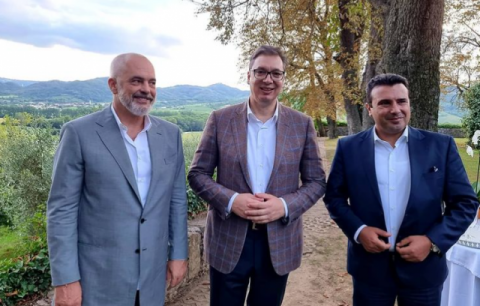 He will be the only politician from the region to speak at a panel dedicated to the future of Europe, together with the leaders of the European Union.
However, before participating in the forum, he met with Edi Rama and Zoran Zaev, and he shared that on his Instagram profile.
"Bled Forum in the shadow of the Open Balkans! Welcome dear friends," Vucic wrote.

After the panel, Vui will have a tête-à-tête meeting in Bled with the EU special envoy for dialogue between Belgrade and Pritina, Miroslav Lajk, and he will also meet with the President of the European Council, Charles Michel. Also, the President of Serbia will have a separate meeting with his Slovenian counterpart Borut Pahor.
Upon his arrival in Slovenia, Vui announced on his Instagram account "Budunost Srbije" that tonight he will host the Prime Minister of Macedonia Zoran Zaev and the Prime Minister of Albania Edi Rama at a dinner in the restaurant of the Honorary Consul of Serbia in Slovenia Tomaz Kavi.
By the way, the main topic of this year's 16th Bled Strategic Forum (BSF), which will be held on Wednesday and Thursday, is the future of Europe and its resistance to challenges, and that is exactly what Vui will discuss with EU leaders - European Parliament President David Sassoli, the Prime Ministers of the Czech Republic Andrej Babi, Slovakia's Eduard Heger, Slovenia's Janez Jana, Greece's Kyriakos Mitsotakis, Hungary's Viktor Orban and Croatia's Andrej Plenkovi.
Vatican Secretary of State Pietro Parolin, EU Council President Charles Michel and European Commissioner for Demography and Democracy Dubravka Suica will also take part in the panel. President of...