Playing War: Pitfalls and Potential of Video Games in the Balkans 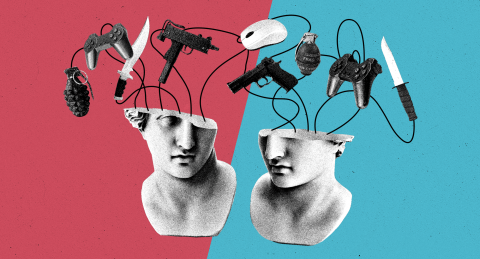 "For us it's like real war; it's a chance to redeem our name and intimidate them, show them we are strong," he told BIRN, speaking on condition of anonymity.

Writing in The Guardian in 2018, the author and journalist Keith Stewart described PUBG as "all rage and death". The player descends into a large area, locates weapons and tries to kill everyone else, i.e. other people playing the game. The last player - or team - standing is the winner. As of June last year, it had been downloaded 236 million times. It's particularly popular in Afghanistan.

The Balkans even has its own official PUBG league where players like K. can compete for prizes.

BALKAN Discord Channel. With over 10,000 members and separate chats for every game the Balkan gaming community meets on Discord to banter and organize play.Screenshot: Amalia Koleka

Critics of such violent video games, however, say they can enhance aggressive feelings and actions, a potentially worrying effect in a region still coming to terms with the bloody demise of socialist Yugoslavia, where narratives of what went on during the fighting vary wildly.

Young people, with only an inherited understanding of the wars, are particularly vulnerable.

But though K's example is a worrying one, what if it wasn't all 'us against them'?

The academic research indicating a link between violent video games and aggressive behaviour offline is extensive.

But some members of the Balkans gaming community argue they are doing more good than harm.

"What I like about gaming in the Balkans is that it brings people together, the community is always a...