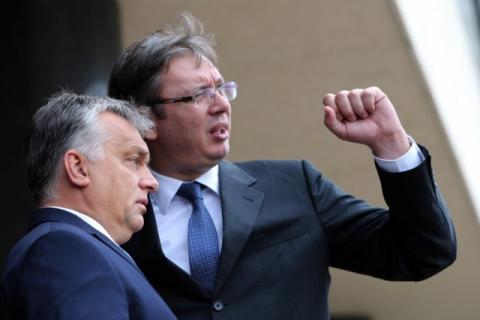 They state that Orbn and Vui express great affection openly and that this was also seen on Wednesday in Slovenia, at the Bled Strategic Forum, also attended by the Croatian Prime Minister Andrej Plenkovi.
One of the biggest stars was certainly the Hungarian leader Orbn, who quarreled with the President of the European Parliament, David Sassoli, and maintained his status as the enfant terrible of the European Union, according to the Index.
Orbn expressed full support for Serbia's membership in the European Union, and even determined that the European Union needs Serbia more than the other way round.

Orbn: Serbia's membership in the EU is our geopolitical interest EPA/KOCA SULEJMANOVIC

"The European Union cannot talk about its security and European identity without Serbia, whose membership in the alliance is a geopolitical interest," Hungarian Prime Minister Viktor Orbn said in Bled, at a panel on the future of Europe.
"Serbia is key. Without Serbia as an EU member, we cannot talk about security or the entire European identity. European Union needs Serbia more than Serbia needs the EU," Orbn concluded. Serbia has not heard such praise from a leader of a European Union member for a long time. Orbn's support for Serbia does not have a significant impact on Croatian state policy, but it does have an impact on a part of the Croatian political scene, writes Index.hr, as the Croatian right idolizes Orbn. Namely, Viktor Orbn has long been a hero of the Croatian right, self-proclaimed patriots and sovereignists, according to the portal. His moves were openly admired by Stjepo Bartulica, Hrvoje Zekanovi, eljka Marki, Velimir Bujanec and many other actors of the right-wing socio-political scene.
For all of them, Serbia is one...