EU position is clear: No future without Serbia and the Balkans: We can't make mistake 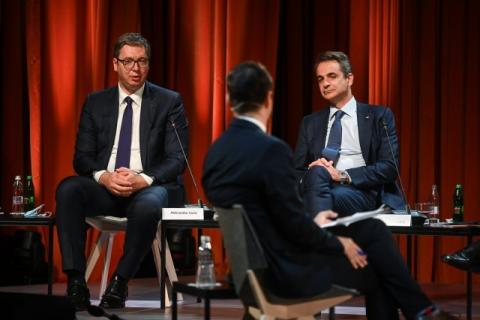 As it is stated, that is the strategic interest of both sides.
European Commissioner for Enlargement Oliver Vrhelyi pointed out that the issue of enlargement is not only the geographical enlargement of the EU, but it is about ensuring political, economic and even security integration.
"The EU must not make a mistake in this case," Vrhelyi said, adding that the countries of the Western Balkans must also believe that it is worth going through all the processes necessary for membership.
Slovenian President Borut Pahor called for the acceleration of the process and integration of the Western Balkans into the EU, while the Prime Minister of that country, Janez Jansa, emphasized that the issue of enlargement is a question of the future of Europe.
"The founders of the EU did not talk about Eastern and Western Europe, but about a free Europe. Their vision will be fulfilled only by the enlargement of the EU to the Western Balkans," Jansa said. Jansa added that this is a strategic issue, which is why Slovenia will do everything during its presidency of the EU Council to accelerate enlargement, and announced the holding of the EU-WB summit in Slovenia in early October.
Albanian Prime Minister Edi Rama stressed that the enlargement process must be accelerated and that, at the very least, negotiations begin with Tirana and Skopje. "Albania and North Macedonia are not asking for permission to be Europeans, we are Europeans. There is no future for Europe without the Western Balkans within the EU," Rama said.
Polish Prime Minister Mateusz Morawiecki supported the enlargement of the EU to the WB, emphasizing that it is a strategic interest of the Union.
"It is necessary to accept the family from the Western Balkans, and not to talk about...