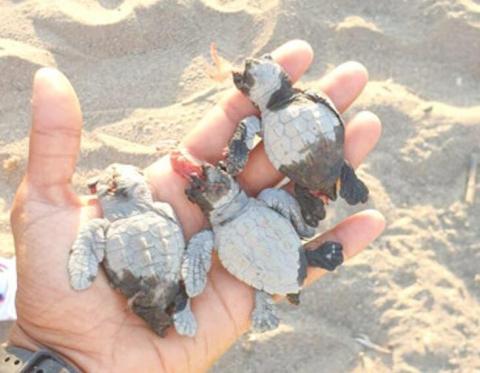 While riding their all-terrain vehicles (ATVs), two men have killed some 16 Caretta caretta hatchlings on a beach in the southern province of Antalya, through which the endangered baby sea creatures reach the Mediterranean Sea.

The disturbing incident happened at the Mendirek beach in the Manavgat district's Sorgun neighborhood late on Sept. 1.

The loggerhead sea turtle (Caretta caretta) is a marine reptile belonging to the family of Cheloniiae, with an average carapace length of around 90 centimeters when fully grown.

Seher Akyol, the head of the Association of Sea Turtles, Mediterranean Monk Seals and Sea Daffodils (DEKAFOK), and Stefan Feuchtinger, an Austrian volunteer, who were at the beach for guarding the turtles, tried to stop the two aggressors.

"One of them rode the ATV toward one of the volunteers and ran over his head and arm," Akyol told Demirören News Agency early on Sept. 2.

The injured volunteer, Feuchtinger, who was immediately hospitalized, is presently in good condition.

"We tried to warn them about the Caretta carettas. They did not care," Akyol noted.

According to the association manager, some baby hatchlings were already on the move toward the sea when the men on ATVs were on the beach.

"We were in hurry to pick up the babies, but 16 were crushed to death," she added.

She also made a call to authorities to punish the two men harshly, expressing, "We hope such an incident never happens again."

Turkey is one of the most important nesting areas in the Mediterranean where two of the seven sea turtle species nest and lay their eggs.