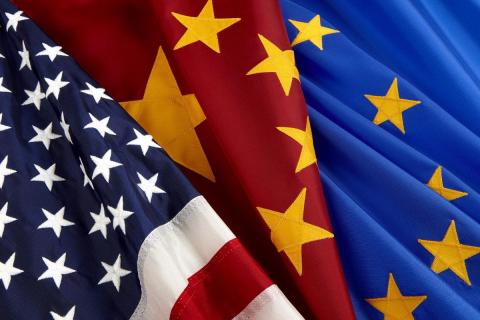 Brdo pri Kranju – EU foreign ministers have called for a pragmatic, realistic and coherent approach to China and for enhancing relations with India, noting at an informal meeting in Brdo pri Kranju on Friday that the EU should cooperate with both countries regarding Afghanistan.

The conclusions from the meeting were presented by EU High Representative Josep Borrell and Slovenian Foreign Minister Anže Logar.

Borrell said that the times were difficult when it came to relations between the EU and China, in particular due to the developments in Hong Kong and in relation to the Uyghurs in the province of Xinjiang.

According to him, the ministers have assessed that a pragmatic, realistic and coherent approach and unity and responsibility were needed and that there should be cooperation regarding Afghanistan and trade and economic issues.

Logar stressed the importance of unity of the EU and said that, given the increasing involvement of China in diplomatic and foreign policy topics and crises, the EU should continue to advocate fundamental principles and values and to build on the relations with the superpower on this basis.

As for cyber security, he said it had been agreed that special attention should be paid to the topic and that strategic supply chains in the EU should be secured.

The EU foreign ministers also talked today with their Indian counterpart Subrahmanyam Jaishankar to exchange views of the Indo-Pacific region, which according to Borrell is the “centre of gravity of the 21st century”.

History will be written in this part of the world that stretches from India to California, he said, noting that the EU was expected to draft a new strategy for the region soon.

According to Logar, the talk with Jaishankar was very useful, as they got a first-hand view of the situation in Afghanistan and its neighbourhood and possible consequences of the formation of a new government in the country.

The ministers expressed the wish for closer ties and called for a trade and investment agreement to be negotiated with India as soon as possible, Logar said, adding that India was interested in deepening relations with the EU.

Asked whether India was replacing China in the geo-strategic positioning of the EU, he said that today’s debate was not dedicated to this and that both countries were important.

Borrell said that this was not the case at all, as India and China were different countries that played very different roles, while adding that the EU certainly wanted to enhance relations with India.

A breakthrough in talks on the trade and investment agreement first needs to be made, and cooperation in the field of security needs to be enhanced. “Afghanistan is a good enough reason for this,” he concluded.

Man gets 23 years for attempted murder of ex-partner, daughter

Predictions on Ljubljana’s future on show at City Museum

Inquiry into SDS financing gets no answer from witnesses