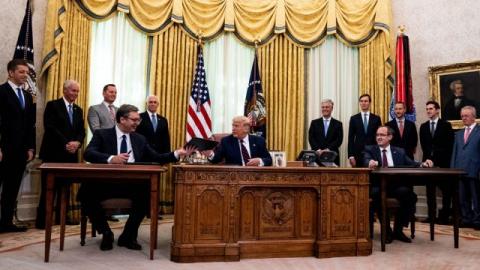 A year after US President Donald Trump held a signing ceremony that saw Kosovo agreeing to suspend its efforts to join international organisations for 12 months and Serbia agreeing to temporarily halt its counter-efforts to get countries to derecognise Kosovo, the agreed timeframe is over and both sides are expected to resume their campaigns.

Deutsche Welle reported on Thursday that officials from Kosovo's Foreign Ministry have said that preparations are being made to apply to join several international organisations after the moratorium ends on Saturday, without disclosing further details.

Kosovo's Foreign Ministry also told Radio Free Europe in July that preparations "are being made by the responsible teams in order to be ready when the application deadlines are opened by the organisations".

Serbian President Aleksandar Vucic told media on Wednesday that he believes that Kosovo's leaders "will continue their campaign to enter various institutions and organisations".

Vucic said his government would "get ready and respond".

Serbia has also campaigned to convince states that have recognised Kosovo's independence to reverse their recognitions.

In March 2020, the Serbian Foreign Ministry claimed that 18 countries had withdrawn recognition or were redefining their positions on Kosovo - mostly African and small Pacific states. A few of these derecognitions have been disputed, however.

Kosovo currently says it has around 115 recognitions.

In July this year, Reuters news agency reported that Turkey's President Recep Tayyip Erdogan said that he wants to suggest to US President Joe Biden that they...