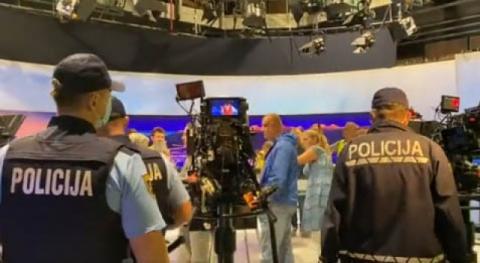 Protesters have been protesting in front of the public service building for weeks, protesting everything that has to do with the coronavirus pandemic, Croatian "Dnevnik" reports.
Under the leadership of Ladislav Troha, the leader of the OPS movement, opposing measures to limit the spread of the virus, protesters handed out leaflets demanding "safe schools and colleges without muzzles", referring to the masks, when they broke into a Slovenian public radio and television service on Friday at around 8:30 p.m.
Journalist Barbara Vidmajer posted a video of the intrusion on Twitter, and the OPS movement broadcast the intrusion on the premises of public television on its Facebook profile.
The police also had to intervene, which, as vecer.com reports, announced that some protesters, who were otherwise present at the reported rally, entered the media house premises: "They did not follow the orders of the security guards, which led to the intervention of police officers in order to ensure public order".
About 20 protesters who did not wear masks were evacuated from the building, RTV Slovenia reported. Measures will be taken against the violators in accordance with the law, the police announced, and the general director of RTV Slovenia Andrej Grah Whatmough said in the show Odmevi: "It is a severe attack on our house and public media, which we strongly condemn. A lot of efforts have been made to improve this situation in four months".
''The problems are quite significant. The legal situation is complex, RTV is the owner of the building, but it is not the owner of the plot around it. This is a public area, the protesters unfortunately had permission to protest in this area. The administration has done a lot, but unfortunately there has been no...