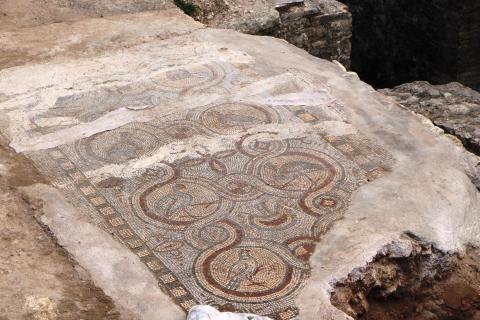 New mosaics belonging to the Byzantine period have come to light during the excavations in the 2,300-year-old complex buildings in Balatlar in the northern province of Sinop.

Excavations started 12 years ago in the complex, which dates back to 2,300 years, in the city center. Tens of thousands of artifacts and seventh-century burial chambers have been unearthed in the excavations carried out under the presidency of Professor Gülgün Köroğlu from Mimar Sinan Fine Arts University's Department of Art History.

Mosaics similar to the ones in the ancient city of Zeugma, dated between the fifth and sixth centuries, were also found in previous excavations. The teams found new mosaics in a different spot during this season's excavations. Work has been started to unearth the mosaics from the Byzantine period in the north of the excavation area.

"Unfortunately, there was a flood disaster in Sinop a few weeks ago. These heavy rains also affected our excavation work for about 15 days. We work in almost every part of the excavation site. Since some areas were filled with water, we directed the works to the western part of the excavation area. There were mosaics we worked on last year. We started to open the north of those mosaics, and we found new mosaic panels. We also cleaned the apse of a great sixth-century church inside and found marble floors. Some of them had been displaced, but their traces were evident. Excavation is a very slow process; we are now clearing the mosaics. Restoration will begin next week," she said.

Stating that there are early Byzantine-era tombs under the mosaics, Köroğlu said: "We recently removed an individual from the tomb. These mosaics were originally made to cover the deceased as a votive offering. The...