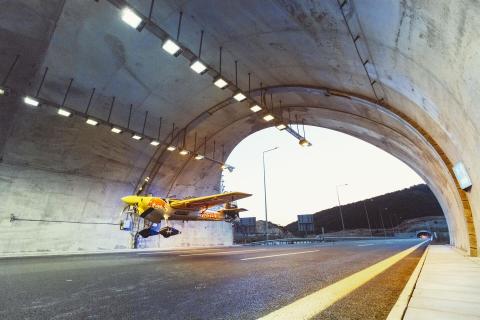 "From take-off to exiting the second tunnel, the flight covered a distance of 2.26km. And in less than 44 seconds, Dario Costa had set a certified Guinness World Record plus four more," Red Bull said on its official website.

Costa then celebrated the Guinness World Record with a loop.

"Everything seemed to be happening so fast, but when I got out of the first tunnel, the plane started to move to the right because of the crosswinds, and in my head, everything slowed down that moment," the Italian pilot said.

"I reacted and just focused on getting the plane back on the right path to enter the other tunnel. Then in my mind, everything sped up all over again," he noted.

Spending his early childhood traveling across North Africa and building up his passion for flying, the pilot did his first solo flight at the age of 16 in 1996.

Teaching and competing in aerobatics throughout his life, Dario eventually evolved with the sport and became chief flight and ground instructor at the Aeroclub Milano in 2011.

The pilot, who broke new ground and records in the last 10 years, continues to embark on new adventures and leave the audience mesmerized at the Red Bull Air Race World Series.