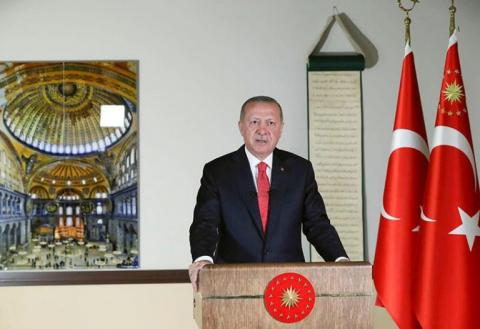 When in July, 2020 Turkish President Recep Tayyip Erdogan turned the Hagia Sofia Museum into to a mosque, he sparked an international outcry.

Over a year later, addressing members of his AKP party in Rize, Erdogan accused the opposition of trying to keep Hagia Sophia closed.

"I returned it [Hagia Sophia] to those who are its owners since the time of Mehmed the Conqueror," he declared. "We determined our path well. Our path is not the same as theirs [the opposition]. Either I will take Byzantium or Byzantium will take me. This pact is our and not theirs."

'Solomon, I have defeated [outdone] you'

Completed in 537 during the reign of the Emperor Justinian I, Hagia Sophia was the Royal Basilica and the Cathedral of the Archbishop of Constantinople and Ecumenical Patriarch for nearly 1,000 years.

"Solomon, I have defeated [outdone] you" the emperor is said to have cried out after its completion, referring to King Solomon's Temple.

Hagia Sophia's splendid mosaics are considered to be among the greatest works of Byzantine art. Turkish authorities covered with long strips of cloth the large mosaic of the Virgin Mary with Christ (called the Platytera) that towers above the apse of the cathedral, after it was turned into a mosque.

In 1935, the founder of the Republic of Turkey, Kemal Ataturk, who had undertaken the gargantuan task of creating a secular Turkey, ordered that the then mosque become a museum.

The largest and most splendid church in Christendom for over 1,000 years, the cathedral - known to the Eastern Orthodox as the Great Church of Christ - is universally acknowledged as an architectural marvel,...