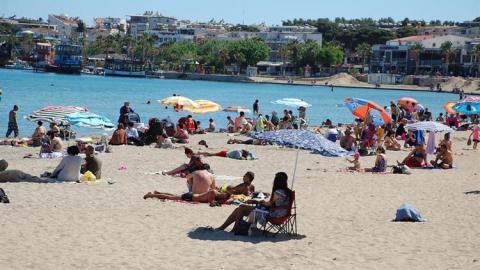 "We are not doing badly. We are still committed to our target of 25 million tourists and $20 billion in revenues that we announced at the start of the season," he said during a press conference at Istanbul's Maiden Tower.

He also said that some 17 million tourists and Turks living abroad visited the country as of the end of August, up 1 million from the overall figure for 2020.

As the world's sixth most popular destination in 2019, Turkey hosted more than 52 million visitors compared to other countries that year, including some 7 million Turks living abroad. Turkey raked in nearly $35 billion in tourism revenues in 2019.

Due to pandemic-related travel restrictions last year, the number of foreign tourists dropped 69 percent to around 16 million, while tourism revenues declined to $12 billion.

Turkey's tourism income stood at $2.4 billion in the first quarter of this year. In the second quarter, tourism revenues hit $3 billion, according to the Turkish Statistical Institute (TÜİK).

When Britain announced Turkey would stay on its "red list" of travel destinations on Aug. 6, some hoteliers decided to close their hotels on the Aegean coast a month earlier than the usual season schedule.

In 2019, Britain was Turkey's third-biggest source of tourists, with 2.5 million visitors that year, most of whom flocked to the Turquoise Coast near Bodrum and Marmaris, where Onur Arıcan runs his 19-room Mavi Yengeç hotel.

This year the number of British guests was down by two-thirds compared to 2019, Arıcan told Reuters,...