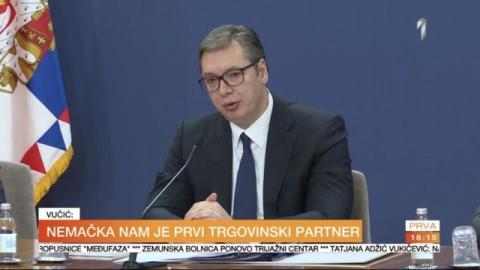 "On September 13, German Chancellor Angela Merkel is coming. I have the honor to host her," Vucic said.
Vui thanked Merkel for showing respect to Serbia and for coming to our country.

"We will never forget what she did for us in 2015 when Croatia imposed sanctions on Serbia. I want to remind you that Merkel represents a country that is convincingly our biggest trade partner. That country is becoming the most important investor in our country," Vucic said.
We have increased the trade exchange with Germany two and a half times in just ten years. "We will do our best to show gratitude but also respect for the woman who was not only at the head of Germany for 16 years, but also informally at the head of Europe, and who also helped the development of Serbia," he said.
"I will have a conversation with Recep Tayyip Erdogan, after that Ursula von Der Leyen...", said Vui. "I will have talks with Dodik on Sunday, before the Day of Serbian Union, Freedom and National Flag. September will be full of important events for Serbia," he said.
According to him, "peace is of crucial importance for Serbia". "Everything we managed to build and changed was because we maintained stability," he added.

About talks with Pristina

"It is good that little progress has been made on the issue of the missing. But there has been no other kind of progress. That was not because, I will try to be gentle, the Albanian side does not want any talks. I do not know why they are doing that," Vucic said.
"We will do everything we can to introduce a part of Albanians into the system of the Republic of Serbia, but we will ask them to know well...